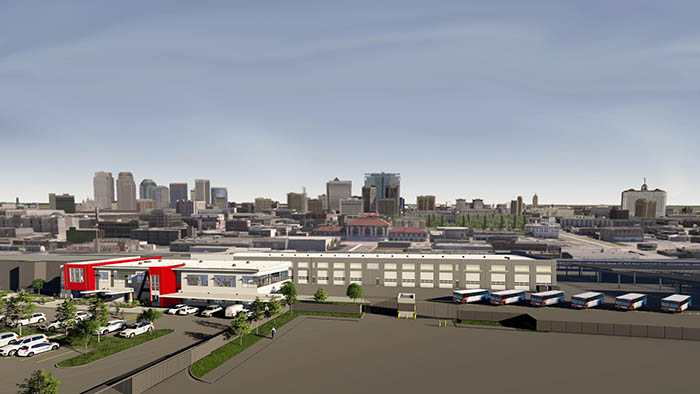 For many years, UTA has been making plans to replace its 45-year old Central Bus Garage, which is fast approaching the end of its useful life. Currently, 100 buses are maintained at the 7.3 acre garage facility designed to serve a maximum of 90 vehicles. The facility was last modified in 1987 and cannot be expanded due to lack of available adjacent land.

The Central Bus Garage is also not large enough to store UTA’s current fleet, forcing the agency to park 20 of its buses at its administrative offices. The lack of space makes it impossible for UTA to expand bus service, as there is no available room to store and maintain the necessary additional vehicles.

Until the late 1950s, the Denver and Rio Grande Western (D&RGW) railroad shops operated as a regional railroad facility located west of the Salt Lake Central FrontRunner Station. The Locomotive Shop, part of the facility, is pictured below. Other buildings on the site included a roundhouse, a wood car shop, a steel car shop, and a storehouse.

As of 2020, the land west of Salt Lake Central Station and north of UTA’s existing headquarter offices is being used to build a new Depot District Clean Fuels Tech Center (the conceptual illustration shown above). The new site will encompass a fuel and fare building, a bus wash building, bus parking, and a new bus maintenance building.

As UTA builds this new garage and clean fuels center, special care is being taken to identify, protect and preserve artifacts from the historic D&RGW railroad facility. Bottles, bricks, dishes and other items have been collected during closely-monitored excavations at the site.

This new facility will consolidate key bus operations and functions currently located at various locations in the Salt Lake Valley. Most importantly, the new garage will provide capacity for the area’s existing bus fleet, as well as room to expand for future growth. As the population grows along the Wasatch Front, this facility will enable UTA to continue providing bus service to meet community needs.